Born in 1969, I grew up in a small town called Muellheim in the Southwestern part of Germany, close to the Swiss and French border, on the slopes of the Black Forrest mountains and overlooking the river Rhine valley plane.

The geological history is strong in this area, which is dominated by an ancient fault zone with some prolific Quartz, Fluorite, Baryte and also some minor lead and silver ores. Medieval mining operations and some more recent ones can be found, but most of them ceased decades or even centuries ago. On the mine dumps - mostly overgrown by now - every stone has been turned many times by mineral collectors trying their luck. It must have been under the subliminal impression of this setting that my interest in minerals got finally sparked.

I started collecting minerals as a young boy at the age of 7. In the aftermath of a typical child game I decided to move a treasured rock crystal formerly in my brother’s curiosity cabinet into my closet, my first quickly improvised “mineral case”.

This was the foundation of my collection!

Supported by my parents – they were no mineral collectors themselves but shared my newly awakened enthusiasm – my small collection grew based on short lists that I created after repeatedly studying a famous German book “Der große BLV Mineralienführer”. Back then I strived to get samples of all nice and valuable minerals from that book for my collection. My father who was travelling a lot in Germany used my short list to bring back new specimens for my collection whenever he ran into a rock shop anywhere.

Incidentally, my great uncle had a friend who was on his leave as professor in Mineralogy at the Ruhr University. At the same time he parted with his comprehensive field-collection mostly donating it to his University, but also saving some stuff for junior mineral collectors. I was very fortunate to benefit from this. It has given my collection a gentle push towards new locations and species formerly not covered by my early aspirations.

Turning 18 I met a well-known mineral dealer located very close to my hometown, Helmut Brueckner, and my introduction to his offering of world-class mineral specimens was an awakening for me. From that moment on I started to pick-up on the idea of only collecting minerals of high esthetic value. Rather fewer and finer pieces instead of plenty.

For the next 30 years I collected based on an increasingly refined pattern. Fueled by improved means based on a successful work life inside the plumbing industry I was able to acquire better pieces instead of just good ones. It was also during this time when I met a lot of new people in the trade, found new fellow collectors and even some very good mineral collecting friends. Above all I need to mention Gerhard Wagner, who since our first encounter in 2012 has mentored me in areas of the mineral business that are not easy to see through or are purposely kept mysterious for various reasons.

Each stage of my collecting history had its merits for the built of a world-class collection. Learnings, often based on mistakes that you inevitably make, opportunities, seized and admittedly also some missed ones, helped me to become a seasoned collector in a world of scarce natural resources that all passionate minds are hunting for. 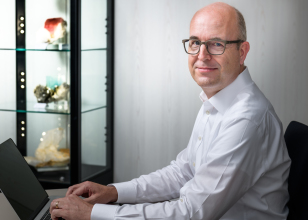 "Gazing at these beautiful minerals there is one thought that comes to my mind ...

Even though one accepts that minerals build along the laws of chemistry and physics and that they have to have an appearance of some sort or form reflecting these rules, how come they are so beautiful?

This is by no means necessary for their existence, neither is it for their survival, since they do not reproduce. Sorry, Mr. Darwin, your laws do not apply here: they are no better, no fitter, no more adaptive, no ... nothing.

Yet they are down there, concealed under tons of rocks, far, far below the surface where no one will ever see them. What a potential waste ...

They are just beautiful because we look at them!"